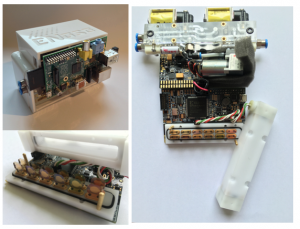 Physiology of olfaction made considerable advances, models of receptors mechanisms explaining the sensitivity to volatile compounds are now available and the genes expressed by olfactive receptors are known. Nonetheless, olfaction still remains a rather mysterious sense basically because of its strong connection with unconscious perception at which corresponds an unusual scarcity of semantic expressions limiting the communication of olfactive experiences. With respect to other senses, (vision, hearing, and touch) for which technological correspondent exists since more than one century, the attempts to endow artificial systems with odor recognition features has been thwarted for a long time.
The primary element of an artificial olfaction system is the ensemble of sensors translating the primary stimulii in a usable signal, usually electric. For vision and hearing, physics provides a sufficient background to develop artificial receptors. In the case of odor only in the last few decades the interaction of solid state devices with volatile molecules started to be investigated making possible the development of chemical sensors. The analysis of odors, namely the investigation of gaseous samples composed by several volatile compounds is a typical subject of analytical chemistry where several methods of separation of mixtures in individual compounds are available (e.g. gas chromatography). Many solid-state sensors developed since the seventies are intrinsically non selective, making them not useful to replace the analytical chemistry goal of measuring at once the concentration of many different compounds.The non selectivity of chemical sensors were considered as one of the main problems limiting their diffusion for practical applications.
Nonetheless, physiological investigations about olfaction receptors shown that Nature strategy for odor recognition is completely different from the analytical chemistry approach. Receptors were found to be rather unselective, namely each receptor senses several kinds of molecules and each molecule is sensed by many receptors. After this discovery, it was proposed that arrays of non selective chemical sensors may show properties similar to that of natural olfaction. After this conjecture the possibility to develop artificial olfaction systems became possible and such systems were soon dubbed as “electronic noses”. This denomination is currently given to any array of unselective chemical sensor coupled with some multicomponent classifier. Since the eighties almost all sensor technologies were used to build such systems. Odor classification properties of artificial systems were tested on several different fields proving that electronic noses could be in principle used to replace human olfaction in practical applications such as food quality and medical diagnosis.

The features of electronic noses are fundamentally dependent on the sensing properties of the artificial receptors. The possibility to have some versatile tool to tailor the sensitivity and selectivity of  sensors is of primary importance to make arrays able to capture either large or narrow ranges of chemicals  allowing for electronic nose application oriented optimizations. To this point of view, organic synthetic receptors, such as metalloporphyrins, offer an unlimited number of possibility to assemble molecules endowed with differentiated sensing features. An important argument about the suitability of metalloporphyrins as artificial olfaction receptors can be obtained considering that, although poorly known, natural olfaction receptors likely contains metal ions at the active sites. Although only a clue, this is a strong argument in favor of the investigation of metallo-organic molecules as artificial receptors for odorant molecules, and among the metallo-organic molecular families metalloporphyrins are surely the most versatile, rich and flexible.

Arrays of metalloporphyrins coated QMB sensors are developed at the University of Rome Tor Vergata since 1994. Their first application was dedicated to study the fish freshness decay. Recent versions of the Rome Tor vergata electronic nose comprises a portable, battery powered instrument and a special prototype optimized to work in microgravity condition and aimed at measuring the air quality inside spacecrafts. The instrument has been successfully tested in 2005 and 2011 on board of the International Space Station.

During the years the developed electronic noses have been applied to many different fields such as fruits harvest optimal time  and lung cancer detection by breath analysis.