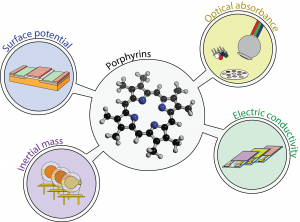 Metalloporphyrins are a molecular family known and investigated since more than one century. They are in particular well-known for their role in living beings where they play key roles such as oxygen transportation in mammalian blood and photosynthesis in plants.
From a sensing point of view, these molecules are rather stable compounds and their properties can be finely tuned by simple modifications of their basic molecular structure. A metalloporphyrin offers a large variety of interaction mechanisms that can be exploited for chemical sensing. Hydrogen bonds, polarization, and polarity interactions are expected to take place between volatile molecules and the porphyrin. Furthermore, coordination interactions takes place at the metal center in metalloporphyrin complexes. From this point of view, since almost all metals may be combined to form metalloporphyrin complexes, metalloporphyrins ligand properties enjoys a large versatility. The role of metal is of primary importance to determine the sensitivity and selectivity properties of the molecule. Particular molecular arrangement can also be assembled in order to provide metalloporhyrins with enhanced selectivity.
To exploit in an artificial system the sensing properties of a sensing material it is essential to match the molecules with some transducer able to translate the interaction events into readable signals (usually electric). For this scope, it is necessary to consider which physical parameters of the porphyrin changes as a consequence of a binding event.

The most simple approach consists in considering the variation of mass. A film of metalloporphyrins indeed after the absorption of volatile compound is expected to change its mass. Devices able to measure the difference of mass of thin molecular films are actually available such as quartz microbalance (QMB) and surface acoustic wave (SAW). Another possibility is offered by the well known optical properties of metalloporphyrins whose relevant optical features can be modified as a consequence of a binding of a foreign molecule. An evidence of this can be obtained considering the change in blood color when oxygen and carbon dioxide are bound to hemoglobin.