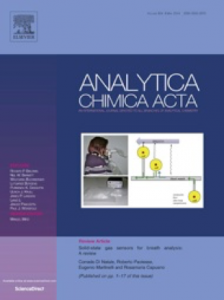 The relationship between diseases and body chemical composition is one of the fundamental aspects of instrumental diagnosis.

This concept gave rise to the discipline of clinical chemistry where the quantification of compounds (e.g. in urines and blood) is related to the presence of specific diseases. In recent years, the study of the chemical composition of human body through the analysis of the volatile compounds exhaled by different body compartments, such as skin, fluids, and breath has been taken into consideration. This assumption is based on the common experience that odor inspection of organic systems can provide information about the status of the system itself. Typical examples are those concerned with the odor–quality relationship in food. In the case of living beings this relationship is expected to be dramatically more complex, nonetheless, a number of evidence was acquired in favor of this hypothesis. In particular extensive research efforts have been exerted to analyze the composition of human breath.

Breath analysis stems from the seminal work of Pauling et al. who identified, using gas chromatography, more than two hundred components in human breath. Besides fundamental components, such as molecular nitrogen and oxygen, carbon dioxide, and water, a long list of volatile compounds were found at concentrations in the nmol/l–pmol/l range.

Many investigations were aimed at determining those compounds, which are either absent or found at anomalous concentrations in cancer-affected patients. Lists of compounds have been indicated by different studies; most of them are alkanes and methylated alkanes that are very likely indicators of oxidative stresses.

The consideration of the global composition of samples rather than specific compounds is among the recent progresses in analytical sciences. This approach can be pursued by using standard analytical equipment, such as gas chromatography–mass spectrometry (GC–MS), in a fingerprinting mode. This strategy became diffused after the introduction of the “artificial olfaction systems” or “electronic noses” which are able to recognize, identify, and classify gaseous samples as the human olfaction does with odors.

Artificial olfaction systems are arrays of non-selective solid-state sensors whose response is not univocally correlated with the concentration of a single compound but it is a sort of combination of the chemical information contained in the sample. In this way these arrays encode the global composition of a sample into a pattern of sensor signals. This mode of operation is strictly analog to the principle of natural olfaction where applying a sort of combinatorial

selectivity, some hundreds of different receptors enable humans to distinguish among tens of thousands of different odors. Such arrays of chemical sensors were applied in many different fields providing in many cases useful identification and classification of samples.

The previous consideration makes electronic noses eligible candidates to detect the anomalies in air sample composition induced by the presence of diseases.